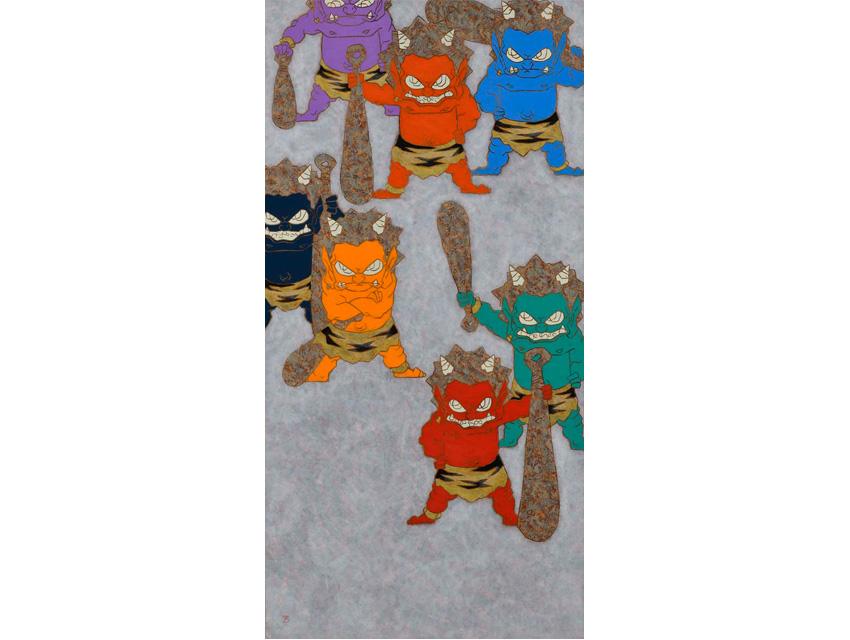 Kazuyuki Takishita was born in Kumamoto Prefecture in 1975. After graduating from the Department of Design,
Tokyo University of the Arts, he completed his study at Chinami Nakajima Laboratory in the same university.
He published his first art book in 2009 and emerged as a young Japanese artist.
He creates many works based on the unique senses to Japanese artists, represented by the series "Momotaro",
which uses motifs derived from Japanese fairy tales."Momotaro" is originally a fairy tale
which a boy named Momotaro taking some animals and cooperate with them to heading out the demons,
but he adds unique conceptions to it and makes a different interpretation. Momotaro himself does not
appear in Takishita's story. In his world, demons are the main characters, and all animals,
enemies and friends are dancing and banqueting with adorable demons. The demon depicted there doesn't
seems to be evil anymore. He focuses on the existence of a demon that was feared from ancient mythology
in Japan, and adds a lot of love to it.

Kazuyuki Takishita continues to create pop and humorous works with the demon as the main motif.
In this solo exhibition, in addition to a folding screen(byobu) of his popular series Momotaro,
he also release a masterpiece of the Wind God and the Thunder God. He colors our gallery space lively
with those motifs.